In the last blog about Z-score, we talked about the odd of having a sample data point x from a given Normal distribution.

Today, we are not taking only 1 data point, but a set of n data points. We call the mean value of this set

, the question is: How likely do we have a sample set with size n whose mean is at least as extreme as

Let’s return to the example of IQ-tests. Humans’ IQ is normally distributed with mean

). This time, says you are not taking the test alone, but with all your classmates. Your class has 20 students, and their average result on IQ-test is 106. The question is: how is your class’s IQ compared to other groups of 20 people?

Remember that in the original version of this example, you are the only one to take the IQ-test, and we compare your result to the full population on Earth. In this modified version, we change the size, from only you (size = 1) to all your class (size = 20). 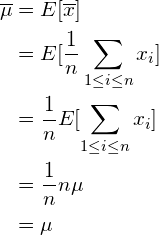 , let’s revise some properties of Variance: 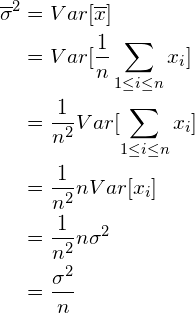 (It worths mentioning that

has its own name, called the standard error of the sample.)

Well done! Now we know that:

To get the z-score of your class’s IQ, we should use this distribution. Do you remember the formula of Z-score? Apply it here:

or we can say in general:

Look it up on the z-table gets us a percentile of 96.3%, which means your class is in top 3.7% of the world (compared to any other groups of 20 people), that’s impressive!

In this blog, we introduced the distribution of sample mean, which is also a normal distribution with the same mean (

4 thoughts on “Z-score on a sample set”