What is an Unpaired 2-sample T-test?

Let’s analyze this definition from scratch. A T-test is a statistical test whose outcomes follow a T-distribution. Two-sample means we have 2 sets of samples, and our target is to verify if the means of the 2 distributions that generate these 2 sample sets are equal. Unpaired means these 2 sample sets are independent of each other, each observation in one sample set does NOT correspond to one and only one observation in the other set (it is opposite to the case of Paired Test). Thus, in summary, an Unpaired 2-sample T-test takes as input 2 sample sets that are independent of each other, and the test’s outputs follow a T-distribution. This is also abbreviated as an Unpaired T-test or Independent T-test.

All T-tests are parametric tests, so they do require some assumptions to be at least approximately true.

As the formula for an Unpaired T-test may be a bit involved, to understand it clearly, that would be better if we could rehearse our knowledge.

As we learned before, the T-test is created to be a substitution of the Z-test in cases we do not know the population variance. To compensate for this lack of knowledge, we define a parameter called the degree of freedom (DF), which is linearly correlated with the sample size. If a Normal distribution is formed by just

, a T-distribution is formed by

A low-DF T-distribution has a fatter tail because when the sample size is small, we are more cautious with using it as the representative of the population, i.e. we expect more weird things to come when using a small set.

The simplest Z-score formula is:

of the population, with unit

All other tests, including One-sample and Two-sample tests, are just extended from this formula. In One-sample T-test, for example, the T-score is computed by:

For the Independent Two-sample T-test, the idea is not changing at all. Let us write the formula out first and then explain it right after. Be noted that, for simplicity, we consider the case when the 2 sample sizes are equal and the 2 population variances are also assumed equal.

The denominator is a bit more complex.

is gotten as the square-root of the Variance, thus we have the above formula for

is then be divided by

, which is similar to in One-sample Test, the reason is that we are examining samples of size n instead of 1 observation alone.

Lastly, the denominator is multiplied by

This also complies with a well-known property of variance: the variance is additive when the 2 datasets are independent of each other.

The degree of freedom equals 2n – 2 as the total number of observations is 2n and we know the 2 means of the sets.

To sum up, we conclude that the formula for T-score in the Independent Two-sample T-test keeps the same form as its root from the Z-test, which is: the difference of means divided by standard deviation, with just some modification to adapt to the input (2 independent sample sets). Overall, the idea is unaltered.

What if the sample sizes are not equal (

, this formula boils down exactly to the above when we assume the 2 sample sizes are equal.

After getting the T-statistics and the degree of freedom, we can verify our hypothesis using the T-table (or with the help of Python, or other means) as previously described here.

We want to test whether a new medicine is more effective in reducing blood pressure than the current one. We do an experiment on some patients, with group 1 using the current state-of-the-art treatment while the second group is treated with the novel drug. The hypothesis test structure is formulated as:

and the significance level is set to be 0.05.

After 3 months of consuming the drugs, the amount of reduced blood pressure for the 2 groups is:

With this input at hand, we then compute the required values: 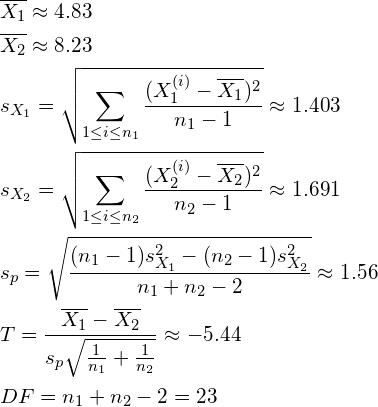 Looking up the T-table on

for 1-tailed T-test with DF = 23 gives the Critical value = 1.714, thus for our alternative hypothesis to be true, we need the absolute of T-statistic to be higher than 1.714, which is fulfilled. Hence, we conclude that we reject the Null Hypothesis to accept the Alternative Hypothesis.